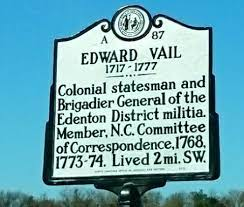 Edward Vail was a prominent figure in Edenton, North Carolina, during the mid-18th century. His public life began in 1754 when he played a crucial role in raising troops for the French and Indian War and personally fought in the conflict in Virginia.

Vail was born in 1725 in New Jersey, and at a young age, he moved to North Carolina with his family. He quickly became active in the community, serving as a member of the Edenton Town Council and as a justice of the peace. Vail was also a successful businessman, owning a plantation and several merchant ships.

When the French and Indian War broke out in 1754, Vail was among the first to answer the call to arms. He helped to recruit and train a company of soldiers and served as their captain during the War. Vail saw action in several key battles, including the Battle of Great Meadows and Fort Necessity.

After the War ended in 1763, Vail returned to Edenton and resumed public service. He was elected to the North Carolina General Assembly in 1765 and served as a member for several years. Vail was also involved in the efforts to establish a public school in Edenton and played a vital role in the construction of the town’s first academy.

Despite his many accomplishments, Vail is best remembered for his role in the early resistance to British rule in North Carolina. He was a member of the Edenton Tea Party, a group of patriots who protested against the Tea Act and other oppressive measures imposed by the British government. Vail’s strong commitment to liberty and independence would later earn him a place in the history of the American Revolution.

Edward Vail was a prominent figure in Edenton, North Carolina, during the mid-18th century. He played a vital role in the French and Indian War, later served in the North Carolina General Assembly and was involved in the early resistance to British rule. His dedication to liberty and independence made him an important figure in the history of the American Revolution.