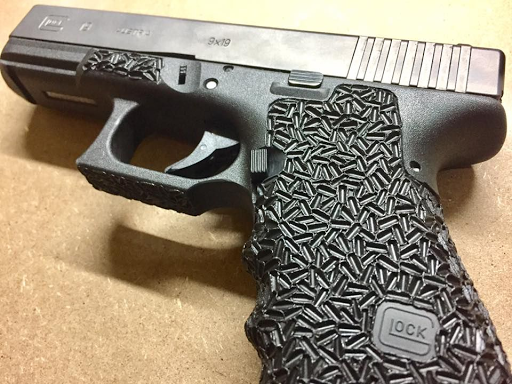 If firing a weapon, and the gun slips from the hands, let it fall to the ground.

Never try to catch the gun midair because it could end badly if a shooter grabs the trigger.

One afternoon, a friend, Fred, was showing his friends his new Kimber pistol.

When one friend handed the gun back to Fred, it slipped from his hands.

Fred tried to grab the pistol in midair, and it fired.

The bullet went into his lower left leg, according to the police report.

Three witnesses explained that the gun was loaded and cocked as they handed it around.

Fred went to the hospital, where he received treatment for a self-inflicted gunshot wound to the leg.

Fred made a full recovery.

Of course, this is not the first time this type of accident has happened. However, luckily no one died because of this mistake.

Shooters should never be passing around a loaded and cocked firearm.

Nevertheless, it also helps to have a solid grip on the gun, giving even wet or sweaty hands a firm purchase.

Moreover, when it comes to pistol grips, some people like to swap out the factory grips for aftermarket options.

Still, another option that more people are turning to is “stippling” the gun grip.

What is gun grip stippling?

Grip stippling is a gun modification that takes a slick factory gun grip and adds dots, ridges, and other formations.

The goal is to produce a texture that’s a better fit for the shooter’s hand.

The technique is growing in popularity because custom work for the particular shooter can be purchased.

For this reason, many gun owners feel stippling is more beneficial than buying an aftermarket grip.

Benefits of stippling the grip:

The apparent reason to stipple the grip is that the shooter will gain better traction and grip when shooting.

Whether it is rain, snow, or sweat, a more substantial grip is a huge factor when shooting outdoors.

Furthermore, a proper grip is critical in a stressful situation because the shooter will know his/her hand is in the proper position.

The hope is no one is ever in this situation; blood on a gun can be very slippery.

If the hands have blood on them, it could be challenging to get a solid grip, but a stippled grip could make a difference.

Meaning that every time a shooter draws the weapon, it will be a tight grip the shooter has trained into their muscle memory.

The biggest problem with stippling the grip of a gun is that it is permanent.

If it is custom to the hand, it might not be a good fit for anyone else.

If a shooter buys a brand-new Glock for $600 and stipples the grip, it will decrease the value. (If you do not ever plan to sell the gun, then it does not matter.)

Also, if the person who does the stippling makes a mistake, it cannot be undone.

The problem we are were trying to fix could end up being much worse.

Plus, if the owner has any warranty on the firearm, it will likely be void if it is stipple the grip.

If one decides to stipple the gun, Please do not risk doing it DIY.

One mistake could completely ruin the firearm.

Instead, talk to a local gun shop and ask if they have a custom gunsmith that does stippling.

If it keeps the gun firmly in a shooter’s hand in a lethal shootout, it is money well spent to save a life.