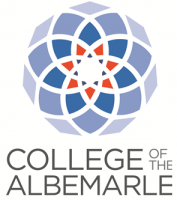 Mr. Whitehurst’s journey with COA, as a student then employee, has spanned 30 years this year. His first course at the college was an evening Emergency Medical Technician class in 1990. He had just begun a four-year apprenticeship with the Norfolk Naval Shipyard when he developed an interest and passion for the field of Emergency Medical Services (EMS). Taking additional courses in the program at night, Mr. Whitehurst received his Paramedic certification a couple years later. “Little did I know that I would end up being affected by a reduction in force and would lose my job at the Shipyard in 1993,” he shared. “Thankfully, I was able to find immediate employment with Pasquotank-Camden EMS and, literally, did not miss even one day of work as a result.” The online and classroom based course offerings at COA led him to obtain two undergraduate degrees; an Associate Degree in Nursing from COA in 2010 and a Bachelor of Science in Nursing from Western Carolina University in 2012. His pursuit to deepen his foundational knowledge and understanding of concepts steered Mr. Whitehurst toward obtaining a master’s degree. “As a healthcare professional, I strive to provide the best, most compassionate care to the people whom I am asked to treat and the program at the University of South Alabama would allow me to continue to care for critically ill and injured patients,” he explained.

Currently, Mr. Whitehurst serves as director of the AHA Training Center that is housed on the Elizabeth City Campus. The AHA Training Center was originally sponsored by Albemarle Hospital. COA’s sponsorship of the center began in 2015. “I assumed oversight of the AHA Training Center while working at the hospital in 2002 and have continued through the transition of the center to COA,” Mr. Whitehurst explained. “The center helps to provide basic and advance life support training for the general public as well as EMS providers, nurses, doctors and other allied health staff throughout COA’s seven-county service area.”

When discussing how COA prepared him for his future employment and pursuit of advanced degrees, Mr. Whitehurst said “COA, in particular the Associate Degree Nursing and health sciences programs, has a strong reputation for helping to develop excellent nurses and allied health providers. The success of this program lies within the faculty and staff, as they set high expectations and they each work very hard to help students develop critical thinking skills throughout the program. COA students, like myself, who choose to further their careers as advance practice nurses simply are well positioned to be successful in graduate school because they have been assisted in developing a strong education foundation through the programs at COA.”

For more information about the AHA Training Center, visit www.albemarle.edu/heartcenter.

Michael Whitehurst poses for a photo at the University of Southern Alabama’s commencement, displaying how COA is always “close to his heart.”