This is fantastic news! 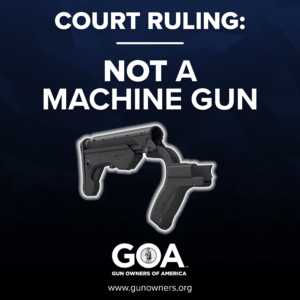 Today, the U.S. Court of Appeals for the Sixth Circuit agreed with GOA on bump stocks.

That’s right. The appeals court reversed an earlier district court decision that had denied GOA’s motion for a preliminary injunction.

This means that for the first time … anywhere in the entire country … a court has sided with a pro-gun organization against the ATF on their bump stock ruling, which classified bump stocks as machine guns.

This occurred yesterday when an appeals court agreed with GOA.

Now the battle goes back to the district court. As you can well imagine, Biden’s ATF will be fighting against us every step of the way.

Our attorneys are prepared to fight this battle. But we need your help.

Please contribute to GOA’s Bump Stock Victory Fund to help us continue the work in defending our God-given liberties.

Contrary to what the ATF claims: bump stocks are not machine guns.

A semi-automatic firearm, even one with a bump stock attached, still requires the trigger to be pressed … then released … then pressed again to fire an additional cartridge. By comparison, a machine gun will keep firing as long as the trigger is depressed or until the ammunition supply is exhausted.

We were pleased to see that the judges in today’s ruling chided the ATF for their “frequent reversals on major policy issues.”

Indeed, for ten years, the ATF said that bump stocks are not machine guns under federal law.

They then reversed course and said that a piece of plastic with no moving parts is a machine gun. If the ATF can do that with a magic wave of the wand, they can say anything is a machine gun.

As of now, bump stocks are not yet legal. By sending this case back to the district court, the appeals court orders the lower court to impose an injunction against the ATF’s bump stock ruling.

In a best-case scenario, bump stocks could become legal in the four states within the Sixth Circuit (Kentucky, Michigan, Ohio, and Tennessee) and might even apply to members of GOA and VCDL nationwide. Please stay tuned for further updates on this.

As you can see, this case is far from over — and it’s why we need your help!

This is our Gettysburg. It is here that we can win the battle against an overreaching agency that is hell-bent on infringing our rights.

Finally, GOA thanks the other plaintiffs in this case who joined GOA and its foundation (GOF): the Virginia Citizens Defense League (VCDL), GOA member Matt Watkins, Tim Harmsen of the Military Arms Channel, and GOA’s Texas Director, Rachel Malone.

I also want to thank all GOA members and donors whose generosity makes our important work possible.