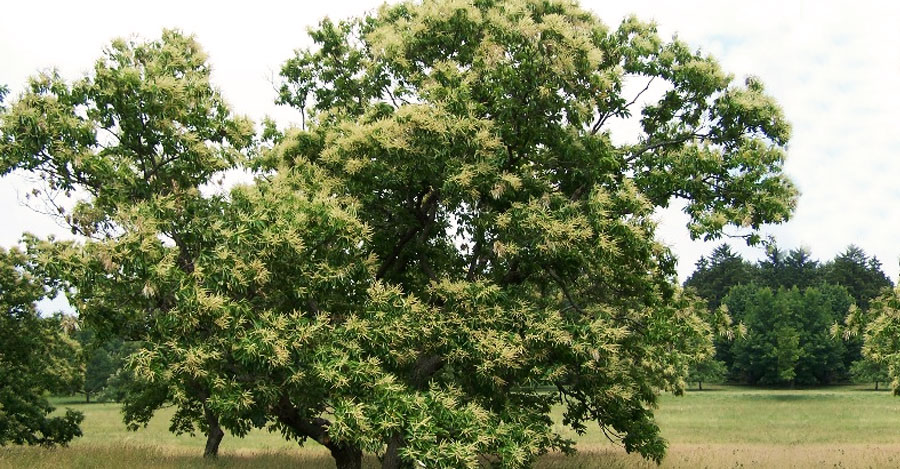 The iconic Christmas song, actually titled “The Christmas Song”, begins with the familiar lyrics “Chestnuts roasting on an open fire”…this line gives a nod to a tree and its fruit (chestnut) that were once widespread throughout the temperate regions of the United States and other chestnut kin are likewise found around the globe. The American chestnut tree (Castanea dentate) is in the Oak and Beech (Fagus) families. The chestnut species once represented about one-quarter of all hardwoods in Appalachia. The related-member trees are also known as chinkipin or chinquapin. These names may ring a bell because several areas in the United States are named just that, like Chinquapin, NC, a community in Duplin County. Unfortunately, the chestnut tree population was decimated by a blight that killed as many as four billion trees with a current day monetary value of approximately 2.0 billion dollars and incalculable ecological impact. Much of this destruction occurred along the eastern United States.

The bulk of the commercial chestnut crop now comes from Europe and Asia, as these varieties were able to withstand the blight onslaught better than their North American brethren were. It is a fairly common seasonal offering in many Asian food markets. During their pre-blight heyday, chestnuts provided a valuable food source for Native Americans and following settler population. Chestnuts can be eaten raw, although they taste a bit astringent, much like a raw acorn. As may come as no surprise, they are often roasted and eaten as such or the nutmeat extracted after cooking, then milled as a flour. The flour was, and is, used in baking and as a thickener in soups and stews. The chestnut nutritional content is high in energy-giving carbohydrates and has one of the highest vitamin C contents of any nut. Further historical health benefits included allaying upset stomachs, treating whooping cough, heart conditions, and even soothing irritated skin. If you are ever treated to the smell of roasting chestnuts wafting through the air on a chilly evening, the appealing aroma will not soon be forgotten. Now, if we can just get Jack Frost to stop nipping at our noses.