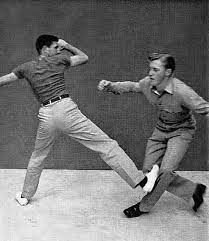 John Styers was a United States Marine Corps (USMC) trainer best known for his book, “Cold Steel: The Technique of Close Combat.” Styers served in the USMC for more than 20 years and was a veteran of World War II and the Korean War. During his time in the military, he developed and refined a system of close combat techniques that he later documented in his book.

Styers’ book, “Cold Steel,” was published in 1959 and became a popular resource for military personnel and law enforcement officers. In the book, Styers outlined a comprehensive system for close combat that included techniques for hand-to-hand fighting, knife fighting, and improvised weapons. He also provided guidance on how to prepare for and survive combat situations.

Styers was known for his practical and straightforward approach to close combat training. He believed training should be realistic and focus on the techniques and tactics most effectively in real-world situations. To this end, he emphasized the importance of physical conditioning and mental preparedness in addition to technical proficiency.

Styers’ close combat system was based on a combination of various martial arts styles, including judo, karate, and wrestling. He believed that a well-rounded approach to close combat training was essential and incorporated techniques from multiple disciplines to provide his students with a diverse skill set.

In addition to his work as a close combat instructor, Styers also served as a drill instructor and a physical training instructor in the USMC. He was highly respected by his fellow Marines and is remembered for his dedication to training and helping his students become physically and mentally prepared for combat challenges.

Styers’ book, “Cold Steel,” remains a popular resource for those interested in close combat techniques and has been translated into several languages. Its practical approach and focus on real-world effectiveness have made it a valuable resource for military personnel, law enforcement officers, and civilians alike.