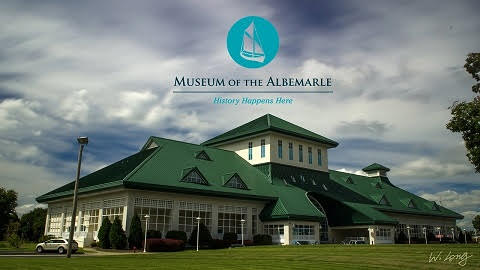 By: Wanda Lassiter, Curator, Museum of the Albemarle

New to the Museum of the Albemarle is moonshine, white lightnin’, juniper juice, whiskey flasks, speakeasies, and a fast, black 1957 Chevy. All of these are a part of the Museum’s newest exhibit Temperance and Bootlegging: A Nation Under Prohibition.

The exhibition opened January 18, 2020 but will remain on display until November 2020. Retractable banners and wall mounted panels discuss how the 18th Amendment to the Constitution banned production, sale, importation, exportation, and transportation of alcoholic beverages in the United States and the lasting effects on rural areas such as northeastern North Carolina and southeastern Virginia. The exhibit discusses temperance organizations such as the American Temperance Union, the Anti-Saloon League and the Women’s Christian Temperance Union to temper, or curb, alcohol use. Moonshine, revenue officers, saloons, and moonshine capitals and kings are also highlighted.

Artifacts include a miniature still, a temperance card and medal, stone jugs, and whiskey bottles dating from the 18th century to the 1930s including a circa 1926 “Eastlake Pure Rye Whisky” bottle and a pint size bottle marked “J. B. Bergeron Liquor Dealer, Elizabeth City” dating from 1892-1902.

The highlights of the exhibit include moonshine still components recovered by the North Carolina Alcohol Law Enforcement agency during a raid in Bertie County and the black 1957 Chevrolet Sedan borrowed from Mr. Wayne Perry.

The Museum has also produced six traveling retractable banners to be loaned to institutions or organizations free of charge. Please contact us if you are interested in borrowing the traveling components.