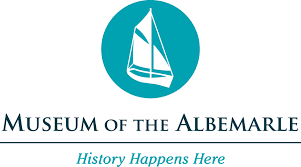 By: Wanda Lassiter, Curator, Museum of the Albemarle

The Museum of the Albemarle is currently working on new exhibits for 2020. We are excited to bring to our visitors, both new and returning, exhibits that will help interpret life in Northeastern North Carolina, the state, the country, and globally. Below are a few of the exhibits coming in 2020. Please check our social media sites for detailed information on each exhibit.

Temperance and Bootlegging: A Nation Under Prohibition opens on January 18, 2020. The 18th Amendment to the Constitution banned production, sale, importation, exportation, and transportation of alcoholic beverages in the United States. Enforced by the Volstead Act in January 1920, this law had a lasting effect on rural areas such as northeastern North Carolina and southeastern Virginia.

The exhibit discusses the movements to temper, or curb, alcohol use had begun as early as the 1600s, with religious groups denouncing the “disorderly” and “immoral” behaviors that excessive alcohol consumption caused. Additionally, the exhibit will discuss moonshine, revenue officers, saloons, and moonshine capitals and kings.

The Day the Lights Came On opens in April 2020 describing how power meant access to new inventions, inventions that led to the food preservation, ease of performing tasks, faster communication, and of course new sources of lighting your home, farm or business.

Women Breaking Barriers opens in July 2020 in connection to the 100th anniversary of women’s suffrage that will be commemorated by the North Carolina’s Department of Natural and Cultural Resources (DNCR) campaign titled ‘She Changed the World: NC Women Breaking Barriers.’ The Museum of the Albemarle, as a part of the DNCR, will be installing an exhibition celebrating women across Northeastern North Carolina who have broken barriers.

Agreement between family members not to “Buy, Sell or Use intoxicating Liquors as a beverage and will use Best Endeavors to Curtail and Prevent the Sale and use of the Same by others.”

Courtesy of the Library of Congress

Federal law enforcement agents from Norfolk and Richmond, Virginia, show the spoils of a raid in the communities of East Lake and Buffalo City in Dare County. The photographs were taken in Elizabeth City in the front of the W. H. Weatherly Company building.