The Ten Commandments of Self Defense 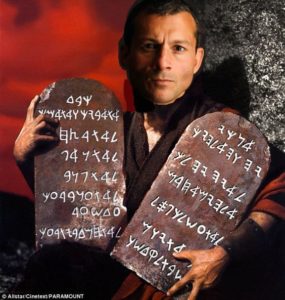 Commandment #1: Your Attacker is Armed.Even though you may not see a weapon, that doesn’t mean one doesn’t exist. Martial arts train you to master different techniques for weapon attacks and another set of procedures for unarmed attacks. While in THEORY, this sounds like a good idea, in REALITY, it will get you a spot on the medical examiner’s slab faster than you can say “CSI.”

That punch maybe a stab; how can you tell the difference?

Did you know that according to the Department of Justice Uniform Crime Report, a weapon was present in over 80% of criminals arrested in connection to a violent crime? This means you need to treat each attack as if it were an armed attack.

Commandment #2: Your Assailant Wants to Hurt You.Don’t hope that your attacker is not going to hurt you. Never trust your attacker, no matter how persuasive they may be. DON’T PROJECT – this animal doesn’t think or reason like you – THEY ARE COMMITTING A CRIME OF VIOLENCE, and that’s something you would never do, so don’t “put yourself in his shoes.”

Most criminals are repeat offenders; nearly 85% of them have spent some time in the criminal justice system, so make no mistake, they are dangerous and are no stranger to violence. Martial arts teach you to wait for your attacker to escalate the attack; in fact, the opposite is true – you need to “react as if your life was in danger” immediately and then once the threat is neutralized, you can “deescalate” your force. You control the severity of the attack, NOT your attacker.

Commandment #3: Your Assailant has “friends.”Your attacker wants to stack the odds in his favour; more times than not, that means he will have help. Unfortunately, you won’t know it’s a multiple attacker situation BEFORE it’s too late. Martial arts teach you different tactics for single and multiple attackers. The truth is you can only “fight” what’s right in front of you. Your mind is a serial processor, NOT a multitasker – try pouring coffee and reading the news simultaneously (don’t forget to have a paper towel handy). This means you can only deal with one thing at a time, so you need to get rid of what’s in front of you FAST as possible and keep moving – avoid going to the ground at all costs because you will get stomped to death. If you go there, fight like hell to get to your feet.

Commandment #4: You’ll be Attacked When You’re Injured or Older.Criminals, like predators, attack targets of opportunity. If you appear weak or distracted, you have a greater chance of being targeted. You must prepare yourself for those times when you” re not at your best. Martial arts require athleticism, tremendous strength and coordination. How often have you missed class because you were sick, injured or out of shape? How often have you put off training due to your current physical condition?

We have a rule at the Self Defense Company: If you can leave your house, you better be able to save your own skin! If you currently train in a program that requires you to be in shape, it’s a fighting sport, not self-defence.

Self-defence is an educationbeforeit’sss an activity It’sss a life skill that should allow you to adapt to your current age, size and physical ability to survive a violent encounter.

Commandment #5: Your Assailant will be Bigger than You. Tigersdon’ttt eats other tigers. They choose smaller and weaker animals. Chances are, your attacker will be larger and stronger than you.

Martial arts typically match you by size, age, sex and ability in the friendly, comfortable class. Going against someone of similar stature is different from facing a more prominent, younger attacker in the street. You need to know how to use any resource to level the playing field.

You must be able to exploityourattacker’sss vulnerable areas with significant motor skill techniques. You use momentum and forward drive to increase your size and use weapons (improvised or concealed) to increase the effectiveness of your defence.

Commandment 6:You’llll have to Fight WHERE. The training room is nice. It has a smooth, matted floor and plenty of space, but it’s not reality. Reality is not so lovely. There’s pavement, rocks, tree stumps, snow, ice and sand. There’s pavement, broken glass and garbage.

No matter where you move, inside or out,youcan’ttt walk 10 feet in any direction without bumping or tripping over something. Martial arts are designed to work in the ring or a matted area intended for safety.

You need to prepare for all environments. You can do this with a straightforward type of movement (stomping and driving footwork) that considers any and every possible setting.

Commandment #7: The fight is NEVER over Don’ttt assumebecausehe’sss down, he’s out. After the initial confrontation, you are the most vulnerable when your adrenaline subsides. Whileyou’reee admiring your handy work, thinking he is going to leave, he may be securing a weapon, or his friends have decided to give him a hand (or a knife).

Martial arts teach you t “”“fight fa””” by instilling rules and etiquette. You shake hands or bow, and when the fight is over, you accept your win or loss and go away.

While this is the spirit of sportsmanship, it has no place in the kill or be killed world of self-defence. You must keep focus after the initial assault and either remove yourself from the area or make sure the target is out of commission.

Even if you” ““shake han””” after the proverbial bar fight, he’s even more of a threat because the next time, he will attack you more brutal and more viciously. Don’t expect him t “”“accept defeat””” you never knowwhoyou’reee dealing with…EVER.

Commandment #8: You Will Miss …a lot.Martial arts make you believe that every shothitsit’sss intended target, every move is a knockout, and every finishing move is a kill shot.

In the real world, you miss. You slip, your attacker moves, and you will miss.

To prepare for this, you need to practice with the attitude o “”“keep fighting until the threat has stopped””” by training in lethal combinations – that means you practice OVERKILL.

In the actual worldyoudon’ttt, stop when you score a point or get your partner a tap out. You must go far beyond the tap andyoudon’ttt get points for style, and there is no justice.

Martial arts teach control and not hitting your partner – this is a huge mistake because you will do what you do in training in the street. In self-defence, you need to go 100% all of the timeandthat’sss how you need to train.

Commandment #9: You will be alone.Almost 100% of people attacked are alone.Itdoesn’ttt matterifit’sss a street crime by a stranger or sexual assault by someone you know. Criminals pick targets they feel they can defeat with minimal effort; they want the path of least resistance, and that meanstheydon’ttt want any witnesses or anyone intervening.

In order todetermineyou’reee alone, they will stalk you, so you need to PAY ATTENTIONwhenyou’reee out and about. Listen to that little voice inside your head and take evasive action if youthinkyou’reee are targeted. Walk-in a manner that will make you appear to offer resistance (head up, shoulders back, looking around)anddon’ttt put yourself in places of ambush.

Commandment #10: Self Defence” ““Count,”” Don’t Work.In martialartsyou’reee taught specific self-defence counters. If he does this, you do that. When he grabs your wrist, you do one defence; you do another guard when he grabs your shoulder. Well, in sports fighting and in class, with a willing partner, these appear to work. But the times you will be attacked – after a long day of workwhenyou’reee thinking about your daily grind, and you find yourself faced with a threat, you will not be able to recall your complicated” ““self-defence counter””” when you move into fight or flight mode.

What has been proven to work under the natural stress of combat are tactics based on position and distance combined with simple, core power. These body techniques target your assailant’s vital target groupings.

Bonus Commandment #11: You Will Survive. The odds are in your favour; 87% of people (both women and men) who resist either verbally or with force are successful andthat’sss with NO TRAINING AT ALL. All criminals fear 3 things – being caught, identified, and injured. The longer you resist, the greater their exposure.

Remember, they picked YOU because they thought you would be a pushover. Your resistance puts them in a position of reassessment – that alone will cause many of them to leave. It’s not a prizefight; youdon’ttt have to defeat them, just survive. Martial arts have made successful self-defence mean that he must be unconscious. Every time you” ““fini””” a defence by putting him on thegroundyou’reee setting your expectation of a successful defence to mean just that, this is ridiculous.

In self defenseitdoesn’ttt matter if you make them stop, hesitate his attack or leave him lying in a pool of his own fluid. The only thing that mattersisyou’reee no longer being attacked.

Remember, 100% of peoplewhodon’ttt resist are raped, murdered, robbed and beaten. Don’t be afraid to make a stand – The hardest step is the first one.

*No one can tell you what is worth fighting for. That’s your decision. Some people will give up their car, others will fight over a dime; either way, the choice is yours but MAKE THAT CHOICE NOWbeforeyou’reee putting in that position. Knowing where your line in the sand is will help you make that first step.