Developing the Orientation for Deception, Conflict and Violence

This month I read a book about mental preparation for self-defence that differed considerably from training focused on weapons and skills. Beyond OODA explores a single element from U.S. Air Force Col. John Boyd’s Observe, Orient, Decide, Act conceptualization. “Orientation is what you bring to the fight, the source of all of the criteria that you use to make every decision,” writes author Varg Freeborn. 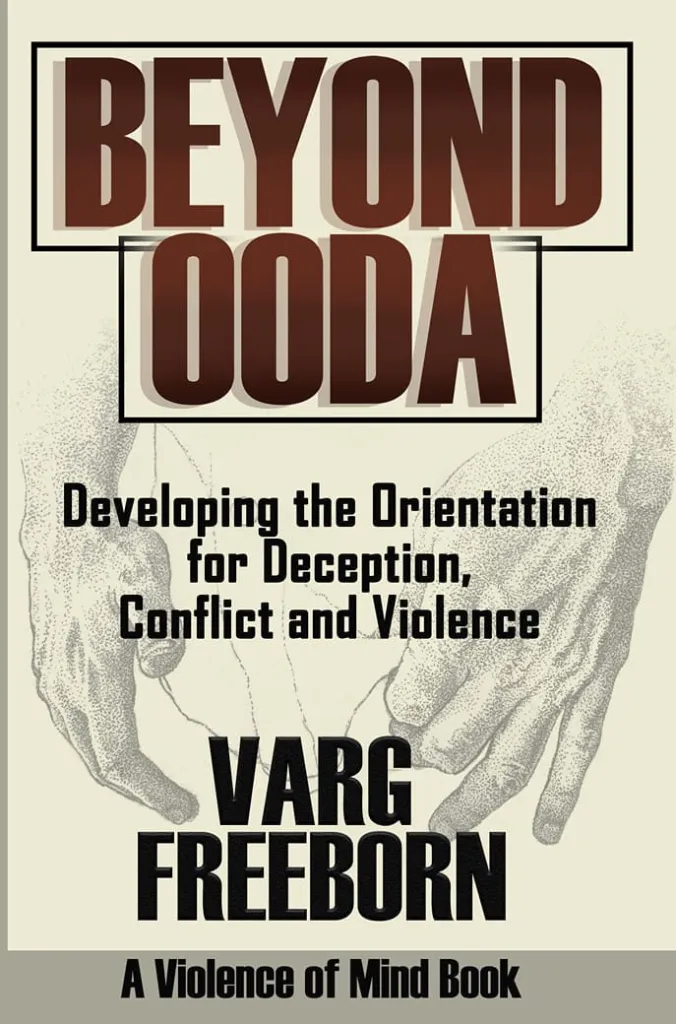 It is the basis of mindset and “control(s) how we see ourselves and the world around us, which governs every decision we make.” This is a two-way street, and throughout the book, Freeborn emphasizes that mindset and manipulation affect both violent criminals and their intended victims.

“Since high-stress situations, such as deadly fights, require strong and rapid decision-making, it becomes very evident that what you bring to the fight are your orientation and its inputs,” he explains. “Everything else: observation, decision-making, and acting all occur during the moment. Those in-the-fight elements can be prepared for physical fitness, conditioning, and training in skills, techniques and procedures. But what you truly bring to the fight is your orientation, and this also can be shaped and trained consciously to a high degree.”

Much has been written, sometimes contentiously, about Boyd’s OODA model, and Freeborn views his conceptualization as an “interpretive extension” of Boyd’s work. In combat, only intuitively-made decisions occur quickly enough to seize the initiative, so one’s orientation must necessarily be congruent with the findings that have to be made in a fight. He suggests, “Intuitive recognition and decision-making can become nearly autonomous within the mind, significantly speeding up the decision-act process. The intuitive mind understands the problems at hand without much conscious thought and then selects decisions from a pre-selected group of possible choices. Boyd referred to this as ‘implicit guidance.’”

Freeborn explains, “In truth…your observation feeds your orientation, and your orientation drives your decision-making. That is a foundational premise. The recognition (which is an observation) triggers your orientation upon which all decisions are based. This exposes a major flaw in most combat or fights training because styles, systems, methods and instructors are hell-bent on the repetition and development of physical skills while mostly ignoring the root sources of decision making in the trainee.” He adds, “Simply developing physical capabilities, mental toughness and being ‘ready to fight’ is not preparing you to make precise, effective and efficient decisions about particular problems under force pressure.”

Applying Boyd’s concept of orientation to the necessary mental aspects of survival, Freeborn teaches that unpredictability is “both the greatest deterrent and a key component to fighting success.” He warns that introducing unpredictability is victorious only by intuiting the assailant’s mindset, intentions and goals. Valuable chapters toward the end of the book detail how criminals and defenders can create uncertainty or misdirect others’ perceptions.

Adaptability is also critical to success. “It’s not always the physically fastest who wins in combat; it’s often the one who adapts and demonstrates mental agility in the situation more thoroughly,” Boyd stated. “Adaptability implies variety and rapidity. Without variety and rapidity, one can neither be unpredictable nor cope with changing and unforeseen circumstances,” Freeborn quotes. That is not to suggest that speed is unimportant; he continues, “Adaptability without agility leaves us in a reactionary mode, which is not where you want to be in a fight or any other strategic situation. Adaptability gives us variety, while agility gives us rapidity, and that combination is how we shift initiative and apply pressure rather than simply responding to pressure.” Of course, you may need to reorient if the enemy does the same.

Freeborn’s emphasis on the mental aspect of survival is not intended to eclipse the need for physical skills, he stresses, only to alert practitioners to the broader necessities for prevailing. “You need the skills, techniques and procedures to win, the willingness and confidence (orientation) to perform them, and the ability to analyze and synthesize new information to modify as necessary (adaptability and agility), to perform at an efficient level when faced with an attack,” he writes.

For our demographic, the gap between real-life experience with violence and our training is necessary of concern. Freeborn discusses well-designed force on force training as a source of experience and opportunities for “the retrospective understanding of the experience.” Mental synthesis occurs only while solving unforeseen problems, he stresses. Without unpredictability, instruction fails to provide the analysis and synthesis required “to reach true creativity and thus begin to achieve adaptability.” He allows his students to fall and “get shot with simulated ammunition a lot. They often know they would have died if the bullets were real, and it’s critical to the process that they know this, he urges.

Criminals, he observes, “are put through violent and life-threatening events without any prior formal preparation. This creates a strong feedback loop…that drives a robust analysis and synthesis system within our decision-making process.” He later addresses initiation rites and their role in willingness to commit violence. Without those experiences, he writes that the law-abiding citizen who trains to prevent being victimized is at a severe deficit.

Beyond OODA is a complex study that is impossible to synopsize fully in a book review. I was particularly interested in Freeborn’s analysis of erroneous perceptions created by one’s background that corrupt the decision-making process. He compares his early life experiences as a child raised in poverty and violence to the reactions needed to survive an attack by a predator. Understanding a criminal’s orientation is crucial to influencing their orientation, he stresses, writing, “The ‘bad guys are humans, just like you. They have fears, insecurities, attachments, values, experience, mythos and stories, archetypes and heroes…They have good days and bad days. The sooner one realizes that the enemy is just like oneself, the sooner one masters that enemy and levels that battlefield.”

Having “reverse engineered” the development of his own mindset/orientation, Freeborn analyzes cultural models we use in creating our identities. Many are little more than wishful thinking! Everyone subscribes to archetypes to guide who, and what they want to be, he asserts. “There’s no human out there operating at normal cognitive and social levels that are not telling themselves a story about who they are and how they fit into the world around them. And when you correctly decipher what that story is, you gain access to the keys that switch their emotions and decision-making factors on and off.” That wisdom works both for governing oneself as well as prevailing over an attacker.

Self-defence preparation needs to introduce us to our own dark sides and capability for violence, Freeborn stresses. “To be truly capable of doing battle with an extremely violent, murderous enemy, you have to be just as capable and just as willing to inflict harm to them as they are to you. Yes, you choose much more selectively who you do it too, but it is the same act. It is the perceived darkness of humankind that you must not only acknowledge but harness.” He warns, “The delicate balance is finding the safe line between preparing yourself to deal with such trauma while retaining your ability to be a good human and still have compassion for others.” Solutions include compartmentalization, systematic preparation, and evaluating and adjusting your values before needing to use violence. Don’t just prepare for the event. Prepare to re-enter life after the event. That is the proper completion of an initiation process: the coming back.”

Freeborn writes convincingly of the need for congruency between one’s beliefs, self-defence training, the law, and on the topic of conviction, has written a significant chapter explaining the relationship between confidence, ideas, realistic evaluation of our skills and abilities coupled with the stories we tell ourselves about who we are. Every word in this chapter is essential; I hope Network members will read Beyond OODA, study it and absorb its many lessons.