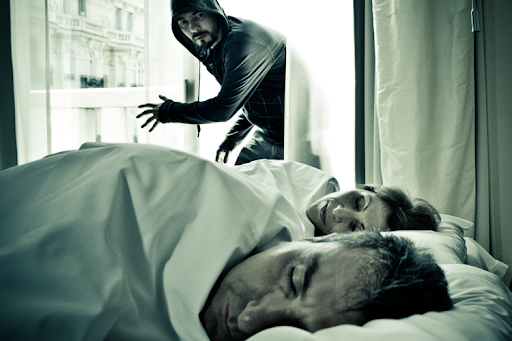 I live in a small town in Utah.

Not much crime used to ever happen until everyone from California and Las Vegas started moving here.

It’s certainly not as safe as it used to be, and here’s an example of a pretty violent home invasion that occurred.

A couple was at home when someone started pounding on their back door.

The husband answered the door, and a man was standing there saying he was at the house to buy drugs.

The homeowner stated they didn’t sell drugs and he must have the wrong house.

The man didn’t like this answer, and he rushed the homeowner and started attacking him and punching him mercilessly.

His wife saw what was going on, and she tried to help her husband by hitting the attacker with a curtain rod.

The man got off the husband and started beating the wife with a metal pipe.

Then he went right back to the husband and started smashing his head into a concrete wall.

Soon after, the man fled on foot.

Thankfully, both the husband and wife survived, and the police caught the attacker, who’s now sitting in jail.

But, here are a few essential lessons from this incident…

First, never answer the door if you don’t know who’s there.

I have had people knock on my door, and I just talk to them through the door. It’s socially awkward, but I don’t mind.

Second, if there’s pounding on your door, grab your gun.

Then, go to the door and talk to the person through it.

If they end up bashing in the door, you want to have your gun on you so you can deal with the threat quickly.

Third, if someone is trying to beat you to death, you can use deadly force if you’re in fear for your life or serious bodily injury.

So, when the wife saw her husband getting beaten, a gun would have been a better option than a curtain rod.

I totally realize not everyone is comfortable with guns, but I have trained my wife, who uses a Glock 19.

So, if in some crazy, worst-case scenario, a guy was on top of me trying to kill me, I hope my wife comes in and shoots him (if she has a clear shot.)

Of course, the best option is not to open the door in the first place and to have a weapon with you if someone is pounding on the door.

Some people use knives.

Just make sure you’re comfortable with whatever weapon you choose and that it’s close by when you need it.