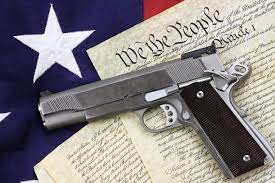 What used to be a legal oddity confined to the tiny State of Vermont is now the law in more than a third of U.S. states, and another five states are looking to pass legislation this year. Constitutional carry is a growing trend that appears uncomplicated on the surface. No permit required for concealed carry should mean exactly that. But constitutional carry can also be a trap for the unprepared. Digging into the history, implementation, and current landscape of constitutional carry will help you avoid any potential pitfalls.

What Is Constitutional Carry?

“Constitutional carry” is a broad term applied to states that do not require a license or permit to carry a handgun. Originally called “Vermont carry” after the first state to enact permitless concealed carry, the name “constitutional carry” has caught on in recent years regarding the Second Amendment of the Constitution.

When President Reagan was elected, there was only one constitutional carry state: Vermont. Now there are many more, along with several bills to move states to constitutional carry. Louisiana, Texas, Tennessee, Florida, Indiana, and Iowa all have bills being considered this legislative session that would enact permitless carry in their states.

As of this writing, the following states have some type of unlicensed (“constitutional”) carry:

Why is it that some states have constitutional carry while others do not? Why doesn’t the federal government get to decide for all states?

While the federal government does have some say in the regulation of firearms and carry (think: commerce in firearms, federal bans on felons possessing firearms, etc.), the Tenth Amendment to the U.S. Constitution reads, “The powers not delegated to the United States by the Constitution, nor prohibited by it to the States, are reserved to the States respectively, or to the people.” The states, then, may decide for themselves where their residents are allowed to carry, whether or not a permit is required, and if so, what those requirements consist of. A review of gun laws in all 50 states shows the law is as varied as the landscape of our great country itself.

Do I Need a Permit?

If you live in a constitutional carry state, it would seem that you don’t need a permit to carry, right? But what if you want to visit another state? All states (except Vermont) that have enacted constitutional carry kept their permitting systems intact so that when residents are travelling out of state, they can still carry (assuming the destination state honours their permit). Similarly, having a handgun license or permit is a good idea even if you’re headed to a permitless carry state since at least two states (North Dakota and Wyoming) restrict permitless carry to their residents. Non-residents can still carry concealed in those states, assuming they have a valid concealed carry permit from their resident state honoured in Wyoming or North Dakota. It’s always a good idea to research the carry laws in the state you’re visiting before setting off on your journey.

Where Can I Carry?

In the states listed, it’s important to note that constitutional carry does not supersede other state or federal laws restricting where you can and can’t carry. Just because you’re in South Dakota doesn’t mean you can waltz into the post office with your concealed firearm; that’s still illegal, regardless of South Dakota law. And in Utah, it’s legal to carry in bars but illegal to be intoxicated and carry simultaneously; the state defines intoxicated as a blood alcohol concentration (“BAC”) of 0.05 or greater. Constitutional carry doesn’t supersede federal law, and it doesn’t negate other carry restrictions in the state. Additionally, some states allow you to carry in more places if you have a carry permit than if you’re carrying under the constitutional carry law. If you’re carrying concealed without a permit, you’re not allowed to carry in a restaurant that serves alcohol in Arizona. Still, if you have a valid Arizona concealed carry license, you can. You can’t be drunk and carry, obviously. Missouri is another state where having a permit is beneficial. In Missouri, local jurisdictions can restrict permitless open carry. However, if a person has a valid Missouri concealed carry permit, they’re exempt from any local restrictions on open carry.

While it’s popular to think of constitutional carry as a way for everyone to carry a gun, that’s not the case. Just like there are requirements to get a concealed carry permit, all the states with permitless carry have requirements for someone to carry concealed without a license. The majority of the states with permitless carry require a person to be at least 21 years old and not be legally prohibited from owning a firearm to carry concealed. Those requirements are so similar to the steps necessary to get a carry permit that constitutional carry legislation failed in Indiana and South Dakota because the governors of both states didn’t believe the single additional step of applying for a permit was a significant enough burden on gun owners.

In states that have legalized permitless carry, many residents still choose to get a concealed carry permit. The added benefits of getting a permit (such as multi-state reciprocity, expanded locations where carry is authorized, and access to training) mean that while constitutional carry is an option, it may not be the best option. If you have questions about your state’s carry laws, please contact U.S. LawShield and ask to speak to your Independent Program Attorney.