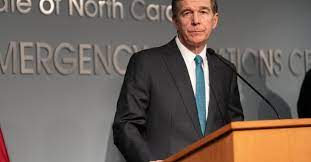 I’m sure you’ve repeatedly heard the old cliché: “This is the most important election ever.” The reality is, in North Carolina, it is never a cliché.

Governor Cooper’s Latest Anti-Gun Veto was applied to House Bill 49. a common sense bill that would have allowed law-abiding North Carolina residents with out-of-date carry permits to reapply without the hassle and expense of first-time applicants. This is the latest in a series of vetoes to Pro-Second Amendment legislation, including Repealing Permit to Purchase Legislation and Concealed Carry in Places of Worship.

Why is this election so essential North Carolinians can severely limit Governor Cooper’s veto power at the ballot box this Election Day? We only need three seats in the State House and two in the State Senate to create a pro-gun supermajority in the General Assembly. The legislature can vote to override the Governor’s vetoes and pass the pro-gun bills he has previously denied  NRA-ILA has full-time staff across the state working daily to achieve that end. Still, we need all the help we can get. There are several ways you can make a difference in protecting the Second Amendment starting now–volunteer with the NRA North Carolina Team today!

North Carolina has the opportunity to say “enough is enough” and elect local, state, and federal candidates that care about our gun rights. This is no time to sit on the sidelines. Governor Cooper has Already Asked the General Assembly for an Assault Weapons Ban, and anti-gun progressives will spend millions trying to get him the votes he needs to pass it.

Please let me know if you want to get involved in the NRA-ILA’s mission in North Carolina. Click the Volunteer button above or reach out to me at Skye@nrailafrontlines.com

If you cannot volunteer, please remind your family, friends and neighbours how much is at stake this election season.