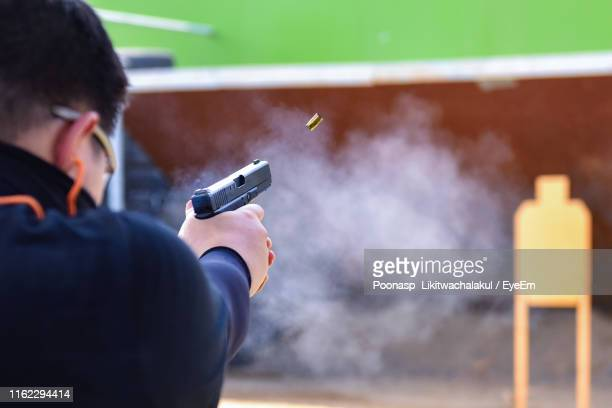 Point shooting involves aiming a handgun using the natural alignment of the shooter’s arm and hand rather than the sights on the gun. This technique is often used in close-quarters situations where the shooter needs to react quickly and accurately, such as in self-defence or law enforcement.

Point shooting originated in the early 20th century when it was developed by military and law enforcement trainers to teach soldiers and officers to shoot accurately in close combat situations. The technique was popularized in the 1980s and 1990s by trainers like Jeff Cooper and Massad Ayoob, who emphasized its usefulness in self-defence situations.

To point shoot effectively, the shooter must be able to align their arm and hand with the target quickly and instinctively. This requires proper grip, stance, and body positioning. The shooter should hold the gun firmly, with the thumb and forefinger wrapped around the front and the other fingers around the back. The gun should be held at chest level, with the elbow bent at a 90-degree angle and the arm extended straight out. The shooter should aim by aligning their arm and hand with the target rather than using the sights on the gun.

There are several advantages to point shooting. For one, it allows the shooter to react quickly in a close-quarters situation, as they do not need to take the time to align the sights on the gun. This can be especially useful in self-defence situations where every second counts. Additionally, point shooting can be more accurate at close range, as the shooter can align their arm and hand with the target more instinctively than they would be able to use the sights.

However, point shooting does have some limitations. It is generally not as accurate at longer ranges, as the shooter cannot use the sights to align their shot as precisely. Additionally, point shooting requires a certain amount of skill and practice to be effective and may not be suitable for all shooters.

In conclusion, point shooting is a helpful technique for shooting a handgun accurately in close-quarters situations. It allows the shooter to react quickly and accurately at close range. However, it is less accurate at longer ranges and requires skill and practice to be effective.