If I had to choose one range of hand-to-hand to teach a family member, it would be close-quarters.

That’s because most street fights quickly devolve into a close-quarters scuffle, and you need to know how to win here.

So today, I’ll cover a simple drill to help you become more confident and effective in this range.

To do this drill, you start locked up with your opponent, where you grab their neck and arm, and they do the same.

You put the drill in action by “pummeling.” back and forth, switching the hands, you grab their neck and arm. 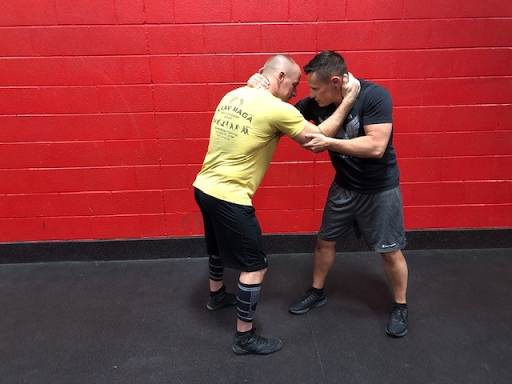 This pummeling action will automatically teach you how to shift your weight and limbs as your partner moves.

And to stay engaged in the drill, you’ll discover the small steps to take with your feet to keep you close and balanced.

As you move, you’ll also notice openings where you could launch brutal attacks.

Here are a couple of examples for you:

For starters, you can take them down by grabbing a leg.

And the best part of this takedown is that you don’t have to “shoot in” for it like a wrestler.

You “pluck” the leg while you’re standing.

Instead of grabbing their arm to make this move, slightly lower your level by bending at your knees.

Now, take a step into your drill partner, knocking their weight and balance to their rear leg.

Making their front leg “light,” and you can reach out and grab their leg behind the knee.

Finally, step in between his legs and trip him straight back to the ground. 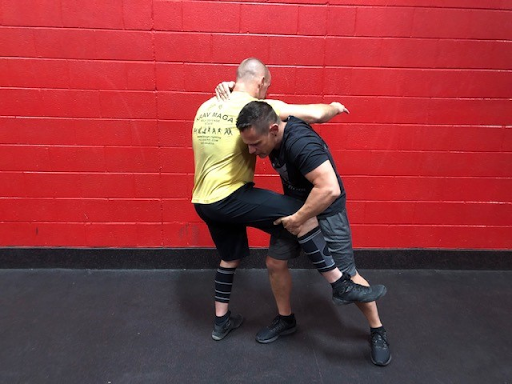 In a real fight, this takedown will allow you to follow up and end things or escape – your choice-

The next move is a choke from a side headlock.

Making a move, slightly lower your level, bob under their arm and wrap both of your arms around their neck and arm.

Putting you in a safe position because you’re to the side and rear of your opponent, out of punching range- 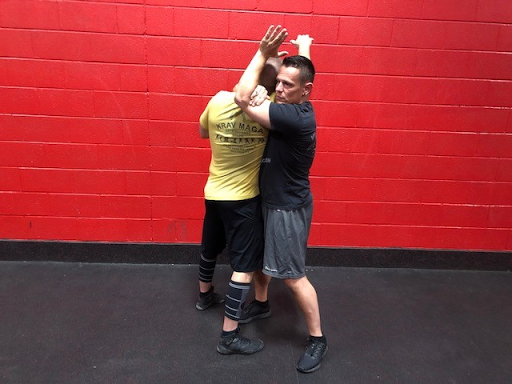 Plus, you have one of his arms tied up, exposing an entire side of his body to your knee strikes.

And if you feel like turning his lights out, you can choke him unconscious.

The pressure of your squeeze on his trapped arm drives his shoulder into the carotid artery on the other side.

When the choke is locked up, it takes ten, maybe twenty seconds of a squeeze to put someone to sleep – but then it’s all over.

Finally, you can use the brutal straight-arm shove.

Instead of locking your arm around their neck, you thrust your straight arm into their chin, driving it up and back.

Shoving their head backwards, they can’t advance on you or launch any significant strikes.

You can easily walk or run them backwards – or deliver kicks to the groin at your leisure. 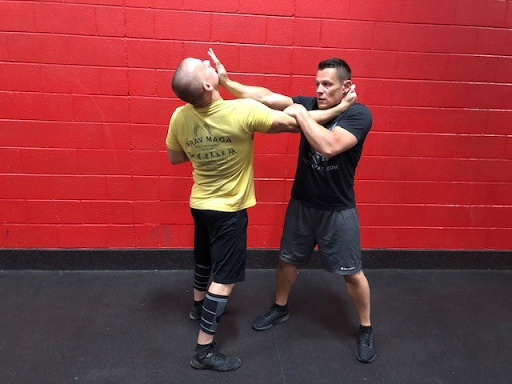 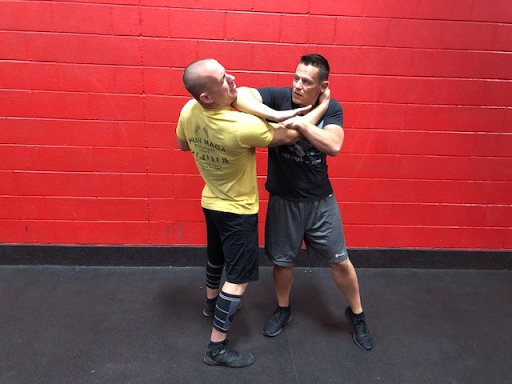 If it’s a life-or-death street fight, you could put all your weight into the elbow strike, crushing their windpipe.

They’ll be too worried about breathing at that point to put up much of a struggle, so it’s up to you how you follow up.

There are many other moves from here, but these three give you some simple but devastatingly effective options.

With just this handful of tools, you can dial up or down the violence, depending on the situation.

By learning and using the pummel drill, you can use it as the “shell” of your training…

And you build these other moves into the drill, which will turn them into hard-wired reflexes you can draw on if necessary.