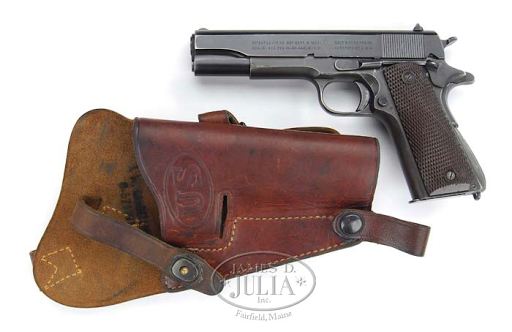 I’m a massive fan of the 1911 pistol and own several of them.

The 1911 pistol was invented by John Browning and made by the Colt firearm company.

It’s one of the most famous and recognized militaries handguns of all time.

Recently, 1911 carried during the Battle of Iwo Jima went up for auction.

The Colt 1911 .45 caliber pistol was carried by a decorated Marine combat photographer, Sgt. Arthur J. Kiely Jr., who joined the Marine Corps in 1943.

He trained as a combat photographer in Quantico, VA.

And from 1944-1945, Sgt. Kiely served as a combat photographer taking pictures during battles, including Iwo Jima.

Smith is known as the father of modern U.S. amphibious warfare. He was the Commander of the Fifth Marine Amphibious Corps.

Kiely photographed conflicts in the Marianas Islands, including Saipan, Tinian, and Guam.

What’s significant about Kiely’s pistol is that it’s believed to have been used in direct combat.

For his actions that day, he was awarded the Bronze Star.

In 1945, he provided photographs for General Smith’s staff during the invasion of Iwo Jima, where he was awarded a Navy Commendation medal for his photographic accomplishments under fire.

But, one like Kiely’s used in battle would be almost impossible to put a price tag on, and it will be interesting to see what it sells for.

Yet, with so many different caliber options, how do you decide which is the best?

Here are a few factors to consider when buying a 1911 and deciding what caliber you should get.

There is little performance difference between .45 ACP and 9mm; many people have a hard time believing. But it’s true.

The fact is, shot placement is more important than stopping power.

And most people are more accurate with a 9mm than calibers such as the .45 and 10mm.

So, you don’t necessarily have to use the most significant round.

Instead, consider a middle-of-the-road round such as the 9mm.

9mm ammo does everything you would need in a self-defense round.

And it’s carried and trusted by police and military personal around the world.

I would go with Speer Gold Dot ammo.

This means there is usually more weight in the front of the pistol. The added weight can help reduce recoil.

A 9mm compared to .45 will already have less recoil, but even more so based on the design of 1911.

Don’t forget the cost difference and availability of ammo.

The design of the firearm is user-friendly, thanks to the ergonomics of the handgun.

But there is no doubt that different calibers in the 1911 platform can be more challenging than others.

Ask anyone which caliber is easiest to shoot, and most folks will agree 9mm.

That’s because 1911 is heavy enough to absorb a good amount of recoil from the 9mm round, making it easier to shoot.

Bottom line, if you like the 1911 platform, consider one in 9mm and see for yourself how much easier it is to shoot.