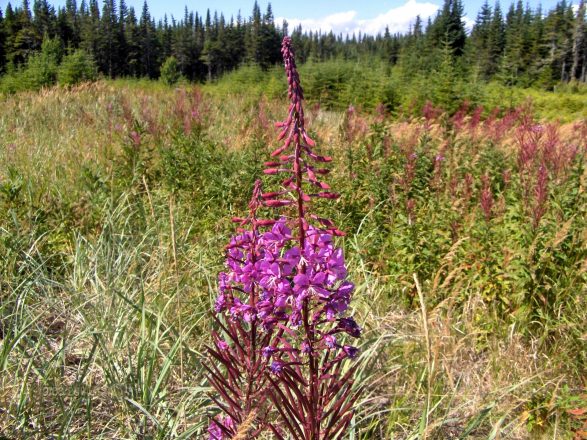 One of the first plants to establish itself after a forest cutover or woodland fire is the aptly named fireweed (Epilobium angustifolium). Some people believe that this plant is abundant and colorful evidence of Mother Nature’s healing process. Fireweed is native throughout temperate Americas but the most abundant representation can be found in the mountainous regions. Native Americans and early settlers have record of the uses of fireweed ranging from food source to medical application.

Fireweed as a consumable extols the virtues of high Vitamin C content, flavonoids and beta-carotene. The preparation can be as simple as consuming the stalks, shoots and leaves fresh or lightly sautéed, or incorporated in a more processed form as a soup, stew thickener or a jelling agent. The taste of the spring-harvested shoots is likened to asparagus and the young leaves reminiscent of spinach.

For medical uses, the fireweed plant reinforces its image as Mother Nature’s healing plant because it was used in many forms and fashions to heal the body from a long list of ailments. The roots were pulverized and used as a soothing poultice that eased inflammation. Fireweed leaf tea has properties beneficial to gut health by acting as a gentle laxative but it also combats diarrhea by balancing water absorption rates in the intestines. Additional gut benefit is granted to treat gastrointestinal inflammation and irritable bowel. The plant also was used to allay intestinal spasms. In part, these benefits are due to the tannins that act as an astringent, mucilage, a soothing component, and the plant also has anti-fungal properties. Fireweed has a significant level of manganese that is beneficial to bone health. In addition, records reveal that fireweed preparations were also used to treat food poisoning, prostate inflammation and sore gums. One of the best attributes for the use of this plant to treat such ailments is that the cure was slow and steady, working with the body to allow it to heal itself.

If you jump into the benefits of this plant, you are not likely to be burned.